Art, architecture and design fill the senses as you wander around to the sound of live music and soak up the Barcelona sun. 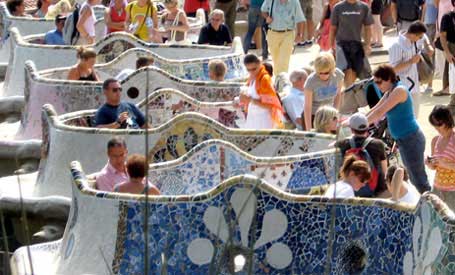 #1 for its sheer uniqueness, striking mosaics and fascinating tour of the mind of Gaudi, the father of Barcelonaâs modernist architecture. This wildly original, absurd yet beautiful park is Gaudiâs largest work to explore. High on a hill, with sweeping views of the city, Parc Guell features such grand-scale oddities as the longest continuous park bench in the world â a winding serpent covered entirely with mosaics created in the trencadis (broken tiles) style. These are infinitely varied, brightly-hued mosaics the likes of which can be stared at all day, and which tend to dazzle and impress the more one looks at them and thinks about the genius required to create them. An absolute must-see in Barcelona â a great place to spend a few hours, people watch, have a picnic and submerge yourself in artistry of a kind you wonât find anywhere else. 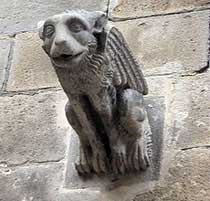 The heart of the Old City since medieval times â a seductive maze of imposing stone walls, narrow streets, gothic motifs and an air of intrigue. Get lost in the twists, turns and alleys â getting lost is part of the fun â and youâll stumble upon hundreds of funky shops, artsy boutiques, cafes, bars and restaurants. Not to mention hidden courtyards, shadowy corners, deadends and a panopoly of unnerving creatures and characters worked into the ironwork and masonry. In the center is the dramatic 15th century Cathedral, with its awe-inspiring gothic faÃ§ade. An elevator ride to the roof provides a good view of the gothic quarter. Cross the Via Laietana while exploring Barri Gotic and you'll be lost in El Born before you know it. 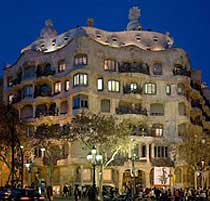 This is a sumptuous feast for the senses, starting with an inside view of one of Gaudiâs most startling and beautiful masterpieces.Â Casa Milaâs front hall is strangely moving with its mesmerizing wrought-iron gate, soaring pillars and fantasia of colors and rolling shapes â true to its designerâs concept of creating a building with no straight lines. Walk up the stairs and youâre also rewarded with live jazz, flamenco or tango in the warm night air, a view of the city with its twinkling lights, champagne, chocolate to savor and a festive party atmosphere amidst the rooftop sculptures. 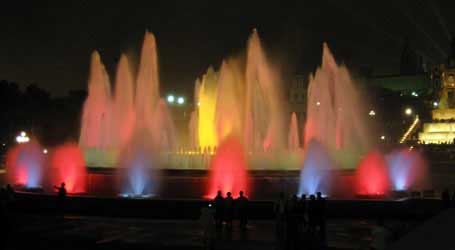 This one often doesnât make the guidebooks. Yet when I was in Barcelona, this was the place where everyone congregated, night after night. The music and light shows in the fountain never seem to get old, and serve as a backdrop for relaxing on warm summer nights. Shows are free, run every 30 minutes, and feature colorful displays of dancing lights, classical and popular music and changing shapes made of water shooting 50 feet in the air. Iâve read reviews that call the music cheesy, but thatâs missing the point. This is entertainment of the most accessible variety â and the most enjoyable. 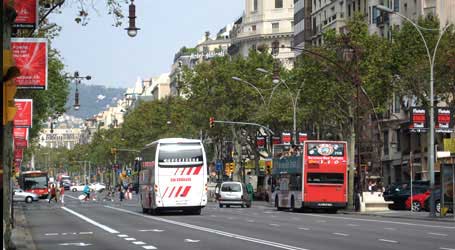 Here's another one the guidebooks skip over. Passeig de Gracia â a street so great Alan Parsons wrote a song about it. This broad thoroughfare is the "Magnificent Mile" of Barcelona, packed with the finest upscale stores, and two of Gaudiâs most show-stopping works, Casa Mila and Casa Battlo. Eight lanes wide, with busses and motos whizzing by, it has a bustling modern city feel. Yet it isnât overwhelming, and it always seems clean, sun-drenched and airy. Expansive tree-lined sidewalks are ideal for strolling and people-watching, and thereâs plenty to see. From the ornately designed benches and lamp posts to the interlocking design in the sidewalk tiles and the parade of modernist facades, Passeig de Gracia reflects Barcelonaâs embrace of art in public places. 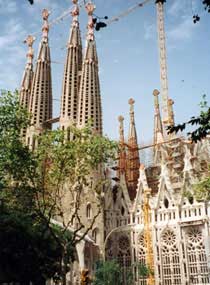 Breathtaking in its scale and ambition, Sagrada Familia will one day be the tallest church in the world â and one of the most spectacular. This 300-ft. high unfinished monument was Gaudiâs greatest dream, a mammoth undertaking over a century in the making. Itâs the best known symbol of Barcelona, a truly unique expression of Gaudiâs organic style, and one of the cityâs most popular tourist destinations. Construction cranes, barricades and debris knock it down a few pegs on my personal sightseeing list, purely in terms of its current eye appeal. But this work in progress remains a must-see. 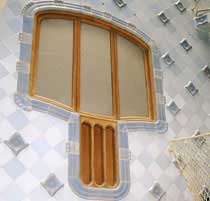 Yet another example of Gaudiâs mind-blowing creativity â one many consider his finest. From the roof, with its undulating shingles and rich, shifting colors, to the interior â residential sculpture â a trip through Casa Battlo will not be forgotten. Look for hidden symbolism in the walls, doors and windows, including this not-so-subtle reference to mortality. 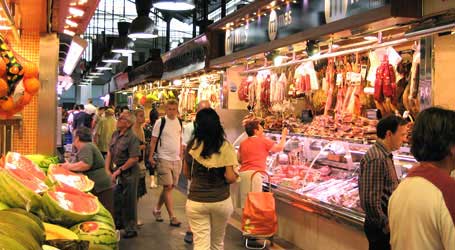 You can get a small taste of the famed Las Ramblas while trekking to La Boqueria, an open air (with a roof over it) market packed with eye-popping assortments of the cityâs freshest fish, meat, fruit, vegetables, cheeses, bread, candy and more. A visceral, visual and fascinating experience, with meat butchered on the spot, endless produce stands filled with exotic and ordinary foods, and lots of opportunities to sample what intrigues you. 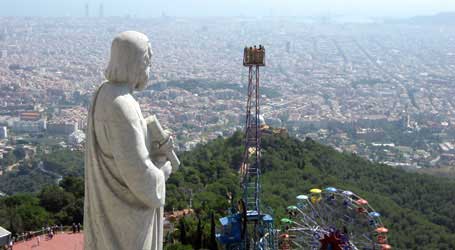 A church and an amusement park side by side? Somehow it works â thatâs the strange alchemy of Barcelona. Tibidabo is reached by funicular train and sits at the top of a mountain overlooking Barcelona. With spectacular vistas of the city and surrounding coastline, itâs worth the trouble to get there (skip the trolley unless youâve never ridden one â the bus is faster and cheaper). Inside the Temple de Sagrat Cor, an elevator ride and a circular staircase lead to stunning 360Â° open air views â the highest in the city. The amusement park is tame â ideal for families with kids â but enjoyably set into the side of the mountain and offering great views from many of the rides. 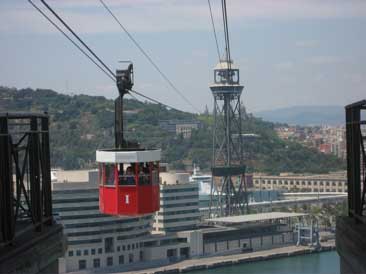 Does it look scary? It isn't. These smooth-gliding, slow-paced cable cars take you from Barceloneta up onto Montjuic, the big hill at the southern edge of Barcelona where the 1992 Olympics were held. Up here, you can wander past the Olympic size swimming pool and see the site of the Olympic flame, but there's much more on Montjuic to hold your interest: beautiful cliff-edge gardens ripe for wandering with a lover, camera-friendly views of the city and also the coastal area, full of industry and cruise ships. The Juan Miro museum full of his unique visual treats. The Parc de Jardins, yet more gardens and walks left over from earlier times. And the Castle, reached by yet another set of cable cars, offering still more panaromic views of the city. 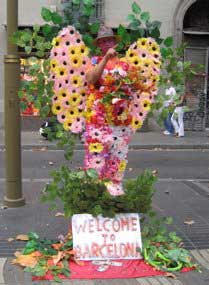 Las Ramblas is centrally located and an ideal place to begin your walking tour of Barcelona. But be ready for a crowd â and the presence of pickpockets. Listed at the top of Best of Barcelona guides every year, this bazaar-like thoroughfare has been over-hyped and thus is a cattle drive of tourists. Itâs a stage for street performers, the home of flower and caged bird vendors, caricature artists and overpriced souvenir shops. In a word, Barcelonaâs biggest tourist trap. Not that it can't be beautiful, in the right light, with the trees in full bloom. Many people do enjoy the energy. Nor do you need to be afraid on Las Ramblas â just be smart about avoiding petty theft by not flashing around big wads of money and keeping your hands and eyes on your valuables. Since I think Barcelonaâs other sights are more interesting, my advice is to sample the atmosphere of Las Ramblas while on your way to somewhere else, like the Barrio Gotic, La Boqueria or Barceloneta. That way you can cross it off your âto seeâ list â or if you do dig the atmosphere of this famous street, come back and do some more people-watching later.

HONORABLE MENTIONS. The Picasso Museum is good if you're a fan, but might not go far enough. It is not extensive and does not display his biggest, best and most famous works â which are in Madrid, Paris and elsewhere. Less known but a great alternative is the Joan MirÃ³ Museum, a showcase for this artistâs surrealist art.

Another interesting building is the Palau de la Musica Catalana, replete with mosaics not done by Gaudi. This building is best enjoyed hearing a concert, but there is also a guided tour. BarcelonetaÂ is the beach in Barcelona â enough said. Amazingly, under the streets of the old city lies another whole layer of old city â excavated Roman era ruins whose vaults you can explore via elevator down from the City History Museum. Block after block of Roman era ruins are meticulously labeled according to use and purpose in ancient times.

Gracia is a less touristed and very cool, funky neighborhood with shops and restaurants, as well as great fiestas. Barcelona has a worldclass Aquarium, Zoo, Football (soccer) Stadium Tours and a Football History Museum that receives over a million visitors a year.